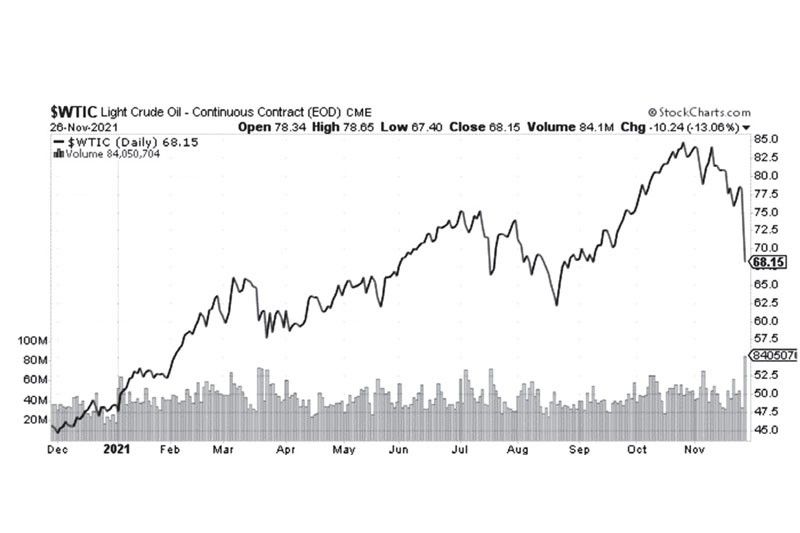 Last week, the US made an important announcement. It will release oil from its strategic petroleum reserve (SPR). The US will dispatch 50 million barrels (mb) and this will be augmented by the SPR release from other countries such as China, Japan, UK, South Korea, and India.

The world’s top oil consuming countries have banded together with the US to form a tactical alliance. We shall refer to this group as USA+. This alliance wants to bring down oil prices in order to arrest the sharp rise in inflation.

On the other hand, the Organization of Petroleum Exporting Countries (OPEC) is composed of Saudi Arabia, Iraq, the United Arab Emirates, Iran, Kuwait, Nigeria, Algeria, Angola, Congo, Equatorial Guinea, Gabon, Libya, and Venezuela. OPEC’s stated mission is to “coordinate and unify the petroleum policies of its member countries and ensure the stabilization of oil markets in order to secure an efficient, economic and regular supply of petroleum to consumers.” OPEC+ is an even larger group that includes Russia and other non-OPEC oil exporting countries.

What we are currently witnessing is a historic battle between USA+ vs. OPEC+. Many feared that oil may go to $100. Some are still concerned about the powerful influence that OPEC+ has and any retaliation that it may initiate. It remains to be seen if OPEC+ will keep its planned output hike of 400,000 barrels per day. However, if it backtracks on this, the group may be perceived as deliberately curtailing supply to raise prices. OPEC+ also runs the risk of losing market share if it scales back on its plans. Last week, the executive director of the International Energy Agency said that soaring oil and energy prices were brought about  by an artificial tightness caused by OPEC+ countries.

Many fear that the sharp ascent of oil may exacerbate the current inflation spike and endanger the global recovery from the pandemic. This is why US President Joe Biden deemed it necessary to initiate the SPR release after OPEC+ rebuked requests for further increases in production. It is interesting to note that China has partnered with the US in releasing SPRs despite ongoing trade tensions between the two countries. The SPRs are emergency stockpiles of oil maintained by various countries to rebalance the oil market in cases of natural disasters, catastrophes, and an actual supply crunch.

In this case, the joint SPR release of USA+ aims to bring down oil prices. However, some experts have commented that instead of tapping the SPR, boosting shale oil and natural gas production in the US may be a better way to augment energy supply. The move of USA+ is part of a bigger objective to tame US inflation, which rose to a 31-year high in October largely due to higher oil and energy prices. This is also a step that has to be taken due to the fragile recovery of the economy from the pandemic. We are confronting a scenario where rising energy prices and uncontrolled inflation may actually derail the global recovery.

A bystander, but at risk of harm

The Philippines is an innocent bystander in the battle between USA+ vs. OPEC+. The country does not have an SPR and is a major importer of oil. Even though Filipinos are mere bystanders, the battle bears close watching because the outcome will affect us in a major way. Further spikes in oil may drive domestic inflation higher and hamper our economic recovery. On the other hand, a pullback in oil prices would bode well for domestic consumption and may contribute in more stable inflation next year.

Omicron variant may be the deciding factor

Last Friday, reports regarding the discovery of a new coronavirus variant shocked the world. This caused financial markets to tank and risk assets to tumble. The Dow dropped 1,000 points intraday and closed 905 points down in a shortened trading day. The S&P 500 fell 2.3 percent, the Euro Stoxx 50 was down 5.3 percent, the Nikkei was 2.5 percent lower, and the PSEi declined 1.2 percent. Bitcoin dropped 8.8 percent and has now entered a bear market. Likewise, West Texas Intermediate (WTI) oil plunged 13 percent as investors were spooked by the new coronavirus strain called the Omicron variant. Originating in South Africa, the heavily-mutated coronavirus strain has been labeled by the World Health Organization (WHO) as a “variant of concern.” It is feared to be more transmissible than past variants and may reduce the effectiveness of existing vaccines. If the new variant becomes more contagious than the Delta variant, it may temper economic activity and global demand may slow down yet again. Ironically, the arrival of the new variant may tilt the balance in favor of USA+. But at the end of the day, the whole world loses if the Omicron variant spreads globally and triggers another wave of coronavirus cases.

Culled from Philequity Management, fund manager of the leading mutual funds in the Philippines.