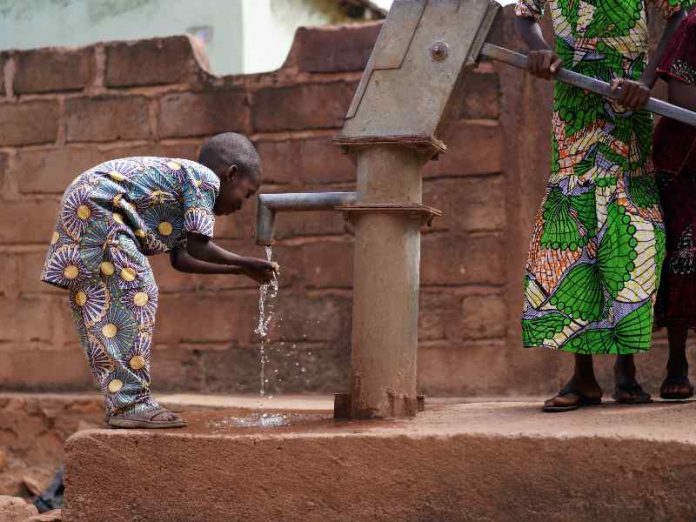 A team of high-level officials and the World Health Organisation recently teamed up to assess and address the effects of the ongoing drought in Somalia. Following this, the team successfully rehabilitated two water pumps, providing 19,716 people with access to clean water.

For just over a month between 7 May and 16 June 2022, Somali local Fatumo Yusuf Diriye spent three hours every day, walking to and from the nearest water source (6kms away) to fetch water for her family. As she could carry only two jirigaans or pails of water at a time and had to wait her turn in a long queue, her family had to use this water sparingly. They resorted to using ashes or sand to clean their hands.

Fatumo knows that having to deal with unsafe water has contributed to her three children, all under five years old, falling sick with diarrhoea many times before. On many occasions, she has had to rush them to the nearest health facility for support. This is one burden that families like Fatumo’s, who depend on her daily earnings from a local market, can do without.

Visit from the Government and WHO officials

One day, early in May 2022, Fatumo heard there was a team of high-level officials from the Somalian government and the World Health Organisation (WHO) visiting the camp where she lived in North Galkayo to assess the effects of the ongoing drought. Even though she could not go to see them, later on, she heard a few community members had requested the heads of the high-level team to support them to fix two water pumps which were not functioning for longer than she could recall. The Salama water pump, which is a borehole close to Fatumo’s home, was one of them, and the Halaboqad borehole was the second one that hadn’t been functioning for quite some time.

The visiting high-level team was led by Dr Fawziya Abikar Nur, the Federal Minister of Health and Human Services, and Abdi Nasir Yusuf Haji, the Vice Minister of Health for Puntland state. Representing the WHO was Dr Ahmed Al-Mandhari, Regional Director for the WHO Eastern Mediterranean, and Dr Mamunur Rahman Malik, WHO Representative to Somalia.

The visiting high-level team was led by Dr Fawziya Abikar Nur, the Federal Minister of Health and Human Services, and Abdi Nasir Yusuf Haji, the Vice Minister of Health for Puntland state. Representing the WHO was Dr Ahmed Al-Mandhari, Regional Director for the WHO Eastern Mediterranean, and Dr Mamunur Rahman Malik, WHO Representative to Somalia.

Delivering swiftly on a promise

Fatumo, who has been living in a camp for the internally displaced since 2017, had heard the WHO team agreed to provide support, but was not sure how this would pan out. To her joy and surprise, within a few days, an expert came by to assess the Salama borehole. Around a month later, the Salama borehole was functioning again.

“Our lives have changed thanks to having water now from the Salama borehole, for drinking and also for all our household purposes,” says Fatumo, as it now takes her just 30 minutes to fetch water now. The Diriye family can now collect at least four buckets of water, as their source, the borehole, is just above half a kilometre away. Hers is just one of the families living in one of six camps and 2,000 households that now have access to clean water from the Salama borehole.

With the WHO’s interventions to rehabilitate the Salama and Halaboqad boreholes, 19,716 people now have access to clean water. This will translate to clean drinking water, fewer waterborne diseases such as cholera and diarrhoea, healthier populations and better sanitation. By protecting their families from preventable diseases, Fatumo and many parents like her can devote their time and resources to raising their families instead of coping with the stresses related to fighting diseases.

Currently, only 52% of the population in Somalia has access to improved drinking water (the population using safely managed drinking-water services). This number is staggeringly low in the internally displaced persons (IDP) camps like Salama. Recurring droughts, such as the one ongoing, make water an even more scarce resource.

Around the world, the WHO and the United Nations Children’s Fund (UNICEF) found that in 2019, 2.2 billion people lacked access to safely managed drinking water services. In July 2010, the United Nations General Assembly recognised access to water and sanitation as a human right. The Health Assembly acknowledged that every human needs to access “between 50 and 100 litres of safe, acceptable and affordable water a day for personal and domestic uses”. The General Assembly also stated that families’ main water source should be within one kilometre of their home and that it should not take longer than 30 minutes for a family to access water.

To complement this, the UN Sustainable Development Goal (SDG) 6 aims to ensure the availability and sustainable management of water and sanitation for all. This will reduce the burden of waterborne diseases, and advance progress towards universal health coverage.