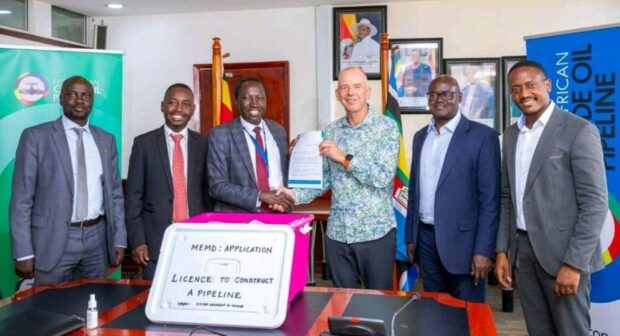 The East African Crude Oil Pipeline (EACOP) company has applied to the Ugandan government for a licence to begin construction.

Acting director of petroleum at the Ministry of Energy and Mineral Development (MEMD) Honey Malinga said the application would be processed within 180 days – by the end of the year.

EACOP will run for 1,443 km, from Kabaale, in Uganda’s Hoima region, to Chongoleani, in Tanzania’s Tanga. It will be the longest heated pipeline in the world. Most of the pipeline, 1,147 km, will be in Tanzania. The remaining 296 km in Uganda will cross 10 districts.

Malinga went on to call for the EACOP company to address issues raised by the government, communities, local leaders and stakeholders.

Tanzania and Uganda signed the Inter-Government Agreement (IGA) on the link in May 2017. The Petroleum Authority of Uganda (PAU) approved the results of the front-end engineering and design (FEED) in October 2020. The National Environment Management Authority (NEMA) approved the environmental certificate in December 2020.

The parties reached a final investment decision (FID) on the Lake Albert project, covering the upstream and midstream aspects, in February 2022.

TotalEnergies is the major driving force behind the link, with a 62% stake. CNOOC Uganda has 8%, while Uganda National Oil Co. (UNOC) and Tanzania Petroleum Development Corp. (TPDC) each have 15%.

The statement said the pipeline would open up additional routes in the region. It said eastern Congo Kinshasa, Burundi, Rwanda and South Sudan could all access the East African coast via the link.

The link will carry 216,000 barrels per day of crude and cost $3.5 billion. The project partners expect to provide 60% equity financing and secure 40% debt.

BankTrack, an NGO opposed to the EACOP construction, has speculated Total may reduce the amount of debt sought. The NGO, and others, have worked to put pressure on banks and financiers to avoid the East African project.

EACOP awarded the main logistics contract to Bolloré Logistics in May this year. The contract covers the transportation of hundreds of thousands of cubic metres of cargo, including more than 80,000 joints of 18 metre line pipe.

The company will oversee the importing of pipe to Tanzania and carrying it to a plant in Nzega district. There, the plant will provide thermal insulation coating. It will then distribute the line pipe across Uganda and Tanzania. The work will exceed 30 million truck kilometres, Bolloré said.